Gabe is a fifth-generation native of the Bethel area, growing up on Hunts Corner in Albany Township. Gabe has spent his professional career bettering communities in Oxford County. He worked for four years with the Northern Forest Center and the Ways of the Woods mobile exhibit. In 2011, Gabe started as a founding board member of Mahoosuc Pathways and since 2014, has served as the Executive Director. In that time, he has led the organization’s efforts to steward and develop trails at 21 locations in nine communities throughout Oxford County. In 2016, he oversaw the development and management of Bethel Village Trails and in June of 2019, he led the completion and activation of the largest conservation project in the town of Bethel with the award-winning 978-acre Bethel Community Forest.

Gabe holds a degree in Environmental Policy and Planning from the University of Maine at Farmington. He is Vice President of CORE, a Senior Fellow in the Environmental Leadership Program, and an alumnus of the Community Practitioners Network. He can sometimes be found patiently renovating his grandparents’ old home on Mason St. with his wife, Jessie, dog Champ, and cat Indiana Jones. 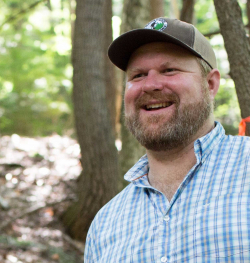 Growing up in a working-class family in Oxford County, Gabe quickly learned the values of hard work and service.

After graduating from the University of Maine at Farmington, Gabe was called to come home to Bethel and better the community that raised him. Gabe has dedicated his entire career to increasing the quality of life in Oxford County.

Gabe is running to serve his hometown in Augusta so that he can bring our voices to state government and make sure Maine works for all of us.